“I Wish I Was the Moon,” True Blood: In Pictures

In this episode, everybody hurts. So let’s all go be emo basketball shorts vampires after the jump!

Well, this is awkward. Sookie and Eric are seconds away from the in flagrante delicto when they are coitus interuptus-ed by King Bill. 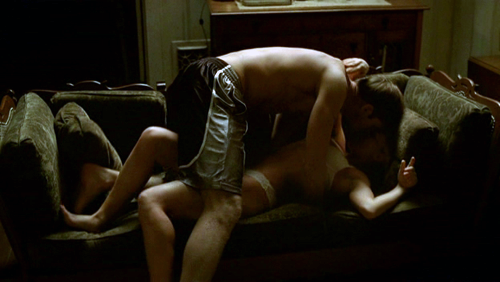 Eric, as usual, freaks out at the intruder in the house and since he is older and thus, much stronger than Bill, he wipes the floors with the king. What’s Sookie doing during all this? Oh, child. You know she’s just hollering. Anyway, Eric is seconds away from fire pokering Bill toward the true death when he decides to take a second and find out who this other vampire is.

Sookie tells him that Bill’s “your king.” Let’s all take a knee.

Credits. Bill has his goons drag Eric across the way to the king’s place. Sookie is hollering about the meaning of all this. Bill’s all, he’s been necromanced and so he’s a danger and then, also he’s totally lying. Sookie calls Bill’s bluff on this, after Bill snits that this has nothing to do with the operating hours of Sookie’s legs being closed to him FOREVER*, so Bill tells his goons to have Sookie arrested for trespassing if she comes on the property again. 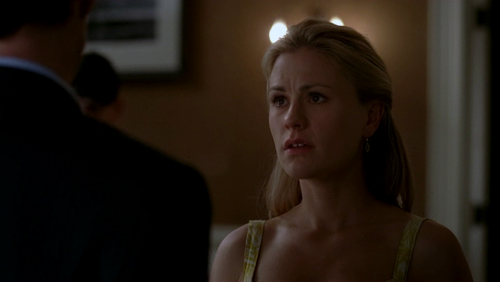 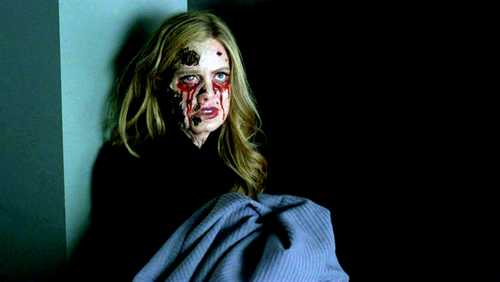 JK. She tells him about the kind of vampire he used to be, a “Viking vampire god” and that they’ll get his life back. He does not want it, because he’s a mopey basketball shorts vampire now. You wouldn’t understand! 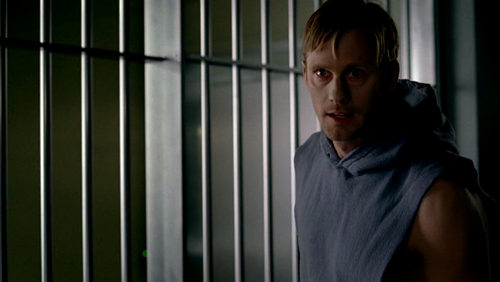 Upstairs, Bill has a teleconference with Nan, where he tells her that he believes that Marnie is using Eric as her very own daysleeper cell. He asks for permission to sentence Eric to (sing it with me if you know the words) the true death. Nan has to run it through the “appropriate channels” before she can give him an answer.

Looks like that matchbook did not burn itself out last week because Terry and Arlene’s bedroom is now on fire. 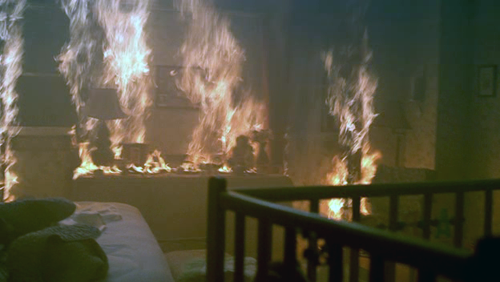 Terry gets the older kids out, tasking Arlene with getting Demon Baby outside. The only problem is, Demon Baby’s not in his crib. Terry ends up dragging Arlene outside, intending to go back and look for the baby himself, but flashover occurs just as he’s running back. But don’t fear! Demon Baby’s outside with his siblings! Lisa tells Terry and Arlene that he was outside when she and Todd got there, “playin’ with that ugly ol’ doll.”

And look, Demon Baby’s made himself a non-alive friend!

I have not mentioned this lately and cannot ever mention it enough, but Terry Bellefleur is The Best. Not only did he get Todd and Lisa out of the house and then come back for Arlene, he also rescued someone else. FELIX!

I am pretty sure that Felix is peeing on him just then, btw. Hey, he’s been through a lot. Anyway, an obviously V-ed up Andy arrives, ready to give Sam a hard time yet again.

Andy is distracted by Holly, who needs help carrying out some of her furniture. [Her place was affected by the fire, too.] Andy thinks Holly is hitting on him, which she isn’t, but she decides to go out with him anyway. Moving on! Sam calls Tommy to tell him to open Merlotte’s, since Sam will be preoccupied with the aftermath of the fire. After Tommy gets off the phone, he starts cursing his reflection and hitting himself, which accidentally makes him shift. Whoops!

Down in Mexico, Lala’s having goat tongue for brekkie. What a fun, sexy time for him. After giving Jesus guff for being a fairweather grandson, Jesus’s abuelo tells him he’ll help on one condition…

Back in Bon Temps, Tara’s girl shows up. Tara spills her guts, but not literally. On this show, you have to make that distinction. 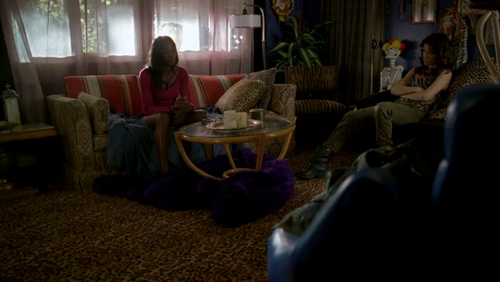 Sookie comes into Merlotte’s talking to Jason’s voicemail. She goes back to Sam’s office to ask for the day off, but Tommy!Sam fires her. I must say that Sam Trammell did an excellent job in this episode of acting like Tommy.

As Brooks and/or Dunn croons about being a brand new man, Tommy!Sam strolls out into the dining room of Merlotte’s. He hollers at Jimmy, that one employee they tried to sneak past me that one time that table 8 has no setups and then he stops to hit on some comely lasses, but he gets distracted by one Maxine Fortenberry. She takes the opportunity to talk a bunch of shit about Tommy, ending in her belief that he’s as dumb as, and as useful as, a bucket of spit.

Sookie finally tracks down Jason. It turns out he was in his own house! Sookie is a regular Columbo [RIP]. Jason tells Sookie the (heavily edited–now with less rape!) story about being a werepanther now and oh yeah, he’s handcuffed himself to the bed because that will keep the shiftin’ away.

Alcide’s come home to my Dad’s house, where Debbie is with the Shreveport packmaster. Marcus Bozeman. Marcus. Bozeman. I keep forgetting his name for some reason. Hey, he ain’t my packmaster! The long and short of it is that Debbie needs a pack, particularly in light of her ongoing sobriety. She wants Alcide to come shift with her and the Shreveport pack that night. [It seems like every other character has mentioned it, but I’ve neglected to–it’s gon’ be a full moon tonight. In the show. The IRL full moon isn’t until the 13th. Ask your packmaster.] 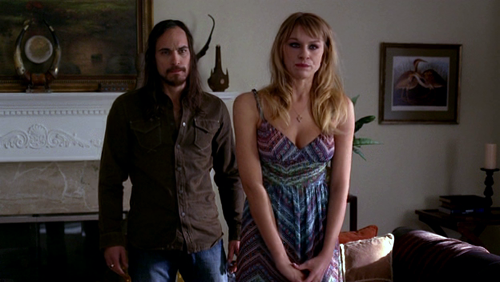 Marnie is cracking up. She’s cutting herself so that she can commune with that one witch from olden times…and now we’re back there, in Spain, where the vampire priests are feeding on the witches. This one vampy priest rapes the HWIC [nope, not capping that] and she vows that the vamps will burn. We go back to *her* burning [a flashback WITHIN a flashback! INCEPTIONED!] and now Marnie knows the secret of how the witch got revenge. Don’t you dare ask. You know she brought the vamps into the sun.

And then the bruja appears in Marnie’s cell and literally jumps down her throat. Below: I’ve got the maaaaagic in me! 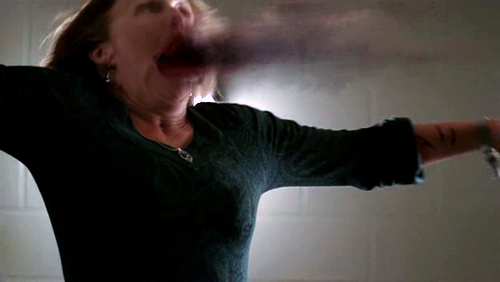 Meanwhile, Lafayette’s sitting with Jesus in a field where the latter is waiting for a sacrifice. And he finds one! Well, that was easy. Let’s go home and forget our troubles with a big bowl of strawberry ice cream!

Jason and Sookie have a boring conversation, the highlight of which is the phrase “pentagram stretch pants.” Jason is so bored by it, he ducks out after sending Sookie back inside to get him another beer. 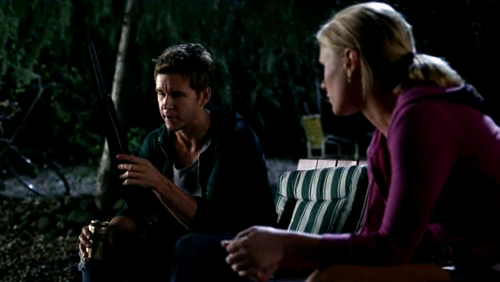 While Sookie is running off into the woods with Jason’s gun, Tara is taking her girl to Merlotte’s. Their waitress is my princess, who senses something strange and runs off while Tara is in the middle of nattering about chili. 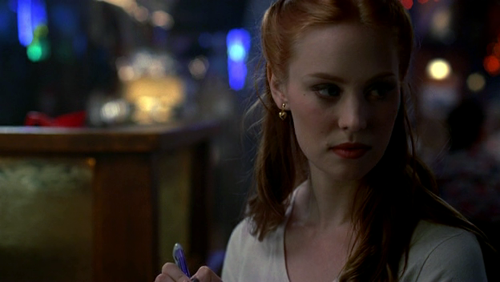 Out back, Luna has popped by to visit Sam, who at the moment is still being understudied by Tommy. She is there to bang. They bang.

The disturbance Jessica felt was Jason’s fear. She finds him in the woods and calms him down, using the same techniques she used to quell her mother’s panic attacks. Specifically, she tells him to focus on something that makes him “feel happy and safe.” Boobs.

Still stalking around the woods, Sookie stumble upon Alcide and Debbie, who are going to meet up with the Shreveport pack to run. They tell her that weres can’t be made. I’m on the right track, baby–I was born to lycanthropize!

Tommy!Sam: I don’t know what it is with females, but I’m not too good at that shit.

While Tommy shifts back into his regular self and vomits, Jason and Jessica are continuing their heart-to-heart, where it becomes obvious that my princess has the hots for Mr. Stackhouse. For his part, he figures he’s not going to turn so he heads home. 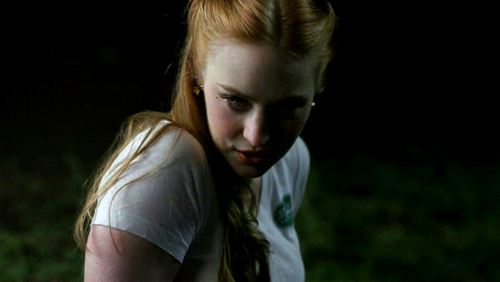 Under the full moon, Bill prepares to administer the true death for Eric. Eric accepts his sentence and says some things about how Sookie taught him to love and my evens cannot with this. He also asks for Pam to be released. Just as Bill is raising the stake–no pun intended–we switch to… 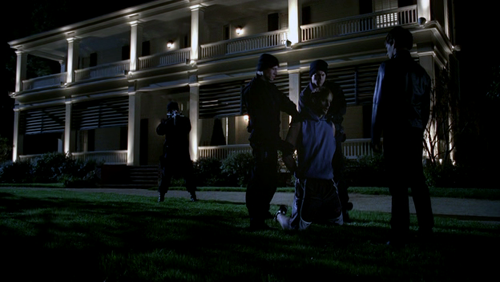 Mexico, where Jesus’s abuelo turns into a kitty.

and possesses Lala, who tells Jesus everything gon’ be alright now. Tio Luca calls upon the power of Yemaya to heal Jesus and it works. Then Luca jumps out of Lafayette.

Way back in Bon Temps, Sam finds Tommy lying in a pool of his vomit. The bad puppy is not regaining consciousness.

In front of Merlotte’s, Tara is having her last smoke as Toni when a newly freed Pam finds them. I cannot get used to this, Pamela. Get better soon!

That one vampire sheriff who lived through the Spanish massacre is watching the security cam of Marnie when he’s drawn to her downstairs. He recognizes her as Antonia and it turns out he was that priest that raped her. Delightful! Now she has hand.

Sookie is STILL in the woods. She doesn’t find Jason, who’s probably warm and cozy on his couch right now, but she does find one mysterious vision in basketball shorts. JK, it’s Eric–Bill let him live, no duh–and they finally make with the banging in what has to be one of the most awkward things I’ve ever witnessed this week. Five minutes ago, Sookie was hollering about being eaten alive by skeeters and now she’s butt-ass naked on the fucking ground while God knows what crawls around her humanity.

[What happened to the gun?]

*Or until THEY bang again.

Posted in It's Not TV, True Blood and tagged HBO, True Blood. Bookmark the permalink.